Review: Gas or Ass (The Cuda Confessions, Book One) by Eden Connor 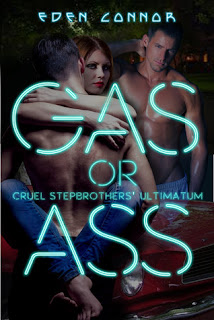 Blurb
Not every relationship is about love.


The odometer on my sex life was stuck at zero the day my mother dragged home a husband I’d never met. Dale brought his two grown sons to help pack and move us into their house. Both were hard-bodied and handsome, but Caine didn’t speak to me. Colt, on the other hand, said crude stuff like, “Wanna ride with me? Then I’m gonna need gas or ass,” but I couldn’t take my eyes off his rippling muscles and challenging blue eyes.
Some are about speed, sex, and defiance.

When Colt offered me a ride to school, I thought the ‘gas or ass’ thing was a joke, but he wasn't kidding. Though he barely touched me, he shattered the innocence I couldn't wait to shed. Even then, I sensed I’d never be the same. He and Caine soon upped the stakes, putting me behind the wheel of cars that could reach insane speeds. They kept challenging me to find my inner wild child, pairing illegal drag races with high-octane sex games, games like 'winner gets head'.

And some are about trying to break you.

It wasn't long before I was hooked, but I always planned to walk away. Then everything spun out of control and walking wasn't an option.

Let me start out with … Once upon a time there was a red headed country girl, her looney toon momma, her super sexy step-dad and two newly found – wickedly nice (but most definitely naughty) stepbrothers. All of these adults were thrown together with the expectation that everyone would be nice. But how can anyone simply be nice when they’re all supercharged from the very beginning?


See, I love a story with a wicked edge, full of angst and characters that can give me multiple holy sh** moments. My first impression(s) of the female lead (Shelby) is that she was having a hard time dealing with her flighty mom, Macy. I was really like, "poor kid … her mom is a turd and have little or no disregard for her." Then when the story got going my opinion began to change about Shelby because with all of things she experienced with her mom I didn't get why she was so gullible. I was literally yelling at the book “You’re just dumb as hell” and "Why are you soooooooo dumb?" Then again I had to give everything a good ‘think’ (yep a good think). So, this is what I came up with --> ego centric mom + affection starved young woman + self-esteem issues = gullible young woman. If this was her mother’s goal - then mission accomplished. If not, then dear ole mom has a lot of work to do. The male leads in this book are so drool worthy and so very, very wicked. Caine and Colt Hannah aren’t twins but damn they could be. Their looks play off one another (the light hair verses the dark) and the personalities are the same. Caine is broodingly quiet while Colt is the manipulative sweet talker. As the reader I ate it up from both of these leads. They lead Shelby on a merry chase of trying to figure out who was the true bad guy between the two and as the read it was the same.


The author did a very good job with this first installment of the Cuda Confessions because she made me fall in love with muscle cars/American cars all over again. This read was steamy and eye popping with a lot of laughing out loud and peppered with ample WTFs. Got hooked and that’s all there is to that. 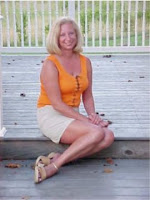 Eden Connor graduated from Converse College with a degree in Psychology so long ago, her sheepskin is chiseled in stone. She’s been a graphic artist, a bridal photographer and an antique restorer. Since the death of her true love, she raised two children to adulthood and now has the time to return to writing. She writes primarily contemporary erotic romances, the odd bit of erotica and an occasional paranormal piece. Most of her writing is set where she lives, in South Carolina, so expect the handsome stranger to come equipped with a slow drawl. Addicted to hazelnut creamer, baseball and cranberry glass, she likes the music of Motown and when not writing about adults behaving badly, she takes a stab at the occasional needlepoint canvas.
Posted by Self-Professed Book Hoarders at 2:35:00 PM No comments:

Mini Reviews: Heart of Falcon Rigde by DL Roan and Trapped with the Alpha (Balfour Shifters Book One) by Emily Minton & Julia Keith

Blurb
Three hearts beat as one, for one. Always.

"Everything inside him ached for Claira in a way that was completely unfair to the memory of his wife." ~ Grey McLendon

Claira Robbins technically didn't exist until two weeks before she began teaching at Grassland Academy. Her new identity may have given her the credentials she needed for the job, but it hasn't helped one whit to soothe her frayed nerves caused by years on the run. It also didn't come with instructions on how to handle three ravenous cowboy brothers intent on seducing her.

Six years after losing their wife, the McLendon brothers are focused on running their family ranch, Falcon Ridge, and raising their rambunctious twin boys. They've never believed they could find another woman with which to share their hearts and family.

When Matt and his twin, Mason, meet their sons' classy new teacher, hope and love aren't the only things that spring back to life. Matt is convinced she was Heaven sent to heal their family. Mason hopes he's right, but knows they have a bigger problem than convincing Claira to take a chance on their unconventional family; a much bigger, surly, older brother kind of problem.

After their wife died, Grey McLendon planned to live the rest of his life comfortably numb from the neck down, even if it killed him...and it just might if he can't reconcile his guilt and desire for Claira before her treacherous past catches up with her.

Review
This was an unexpected gem. Its been awhile since I've picked up anything containing cowboys and if I did it had something to do with the Sacketts (props to Louis L'Amour fans). This was good and all of the main characters were so very, very likable.


So, lets break it down a bit with an Angie facts:

1. Vaqueros son muy caliente.
2. There is nothing more endearing than a guy getting all emotional.
3. There's nothing better than a book that has you cackling like a loon. Who knew hamsters and squirrels would crack me up.

Like in any good story (for me) the heroine has to likable, but not just likable. There are a bunch of 'she can't be' included in this. Claira Robbins (Gabriella) is likable because she a solid female lead. She isn't a 'kick butt' kind of lady but she has a quiet strength about her that is needed to counter balance the three male leads of this story. I like that her character is able to attract some real 'nut jobs' because it keeps the reader guessing about who was behind the different things that was going on. Though Claira's character is good, she wasn't the star or this story. That honor goes to los tres vaqueros (three cowboys).

The male leads have three completely separate personalities that the author did a good job of not blending their characteristics together or confused the reader about which one(s) were being featured. Grey McLendon eldest of the McLendon boys and leader of the bunch is heart broken and punishing himself for what he believes caused the death of his pregnant wife. Dark and brooding with piercing green eyes isn't ready for the love that walks into life in the form of Ms. Claira. The twins Matt and Mason are adorable. Matt is all smiles to Mason's calm but the trio make a good match for Claira.

Besides the cowboys and the McLendon family as a whole, I liked that the author made sure that a complete story is told. A lot of the time, these sort of books get stuck in one place (the bedroom) and never accomplish telling the story. Would have liked more of the bad guy or guys (to see what made them tick) but there was enough there to keep you guessing about who did what, why and how. Overall 3.5

For eight-hundred years, Isabel McKay has been trapped in her own personal prison. She is forced to watch the man she loves live his life as if she never existed. Pain, betrayal and utter despair are her constant companions as she remains locked away.

Brody Balfour has spent the last eight-hundred years trapped in his legacy. He and his wolf both long for a mate, but he is beginning to wonder if it’s a lost cause. Loneliness, treachery, and possible failure are his constant companions as he endures in his birthright.

Finally able to leave her prison, she realizes she is trapped in her memories. She still loves Brody more than her next breath, but how can she forgive him for the things he has done? Jealousy and anger are her constant companions as she is haunted by her imprisonment.

Finally able to fulfill his legacy after finding his mate, he realizes he is still trapped in a nightmare. He loves Izzy more than life itself, but how can he convince her of that after all of the things he has done? Denial and helplessness are his constant companions as his past and future collide.


Isabel McKay has been trapped for 800 years, tethered to her mate's side, watching his downward spiral ... watching him hump anything that came his way. Her only sin was that she fell in love with Brody Balfour. Then again, their predicament isn't Brody fault either. They are both victims of a crazy delusional witch looking for revenge. Straight forward plot: Boy+Girl+Ancient Curse= Witch's Revenge but the female lead just messed up the story a bit. The heroine is in full I'm the victim mode and I understand why. But come on.

The male lead (Brody) is drowning himself in self destructive sexual activity and she's really pissed (and its understandable) that she has to witness it. But this character goes from being pissed about him having sexual encounters with hundreds of women for 800 year to being mad that he didn't care enough about them or that he didn't take the time to get to know them. Really? I understand that the heroine's behavior helps to lead up to the climax of the story but there is a certain strength lacking in this female lead.
Posted by Self-Professed Book Hoarders at 4:39:00 PM No comments: