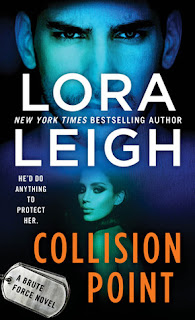 Those readers familiar with the author's previous series will not have a problem falling head first into Collision Point, the first entry of the Brute Force Series. This first entry has all of the markings of a Lora Leigh tale, which includes a good storyline and lead characters whose chemistry leaps off the page.

What happens when the son of a Russian mob boss goes legit? Well, a lot of baggage is cut loose (some still breathing) and they gain more enemies than they had before. Amara, the daughter of the Resnova crime heir represented a solid female lead for the first entry of Brute Force series but I would have liked to see her character do more. Amara's character is a survivor with incredible heart and loyalty but I do feel there was a little something missing. Amara's character survived being kidnapped, being brutally beaten and memory loss. After going through all of that there was still an expectation to see more an evolution of her character beyond the regaining of her memory.

Riordan is the sexy alpha male lead that Ms. Leigh is famous for and nothing is missing from this character's makeup. Ubber protective and willing to go toe-to-toe with Amara's father, Riordan is the cock-of-the-walk of this entry but besides being great mind candy his character is a bit limited. His task is to keep Amara alive and there aren't many action sequences that display his ability as her protector. Was looking forward to having scenes where this character was kicking the tar out of something. As her lost love, there is more than enough fuel for the interactions between the two characters. The chemistry is off the charts.

While reading, it will be easy for the reader to believe that they know who is behind the plot to take down the Resnova family but the author will keep the reader guessing until the end. Since the memory loss angle took up most of the story the ending is a bit rushed. Trust and believe there are many more characters that didn't meet with what they deserved.

Thank you to the St. Martin's Press and Netgalley for providing this ARC in exchange for an honest review.