Review: Hold Me Down (The Deacons of Bourbon Street) - Book 3 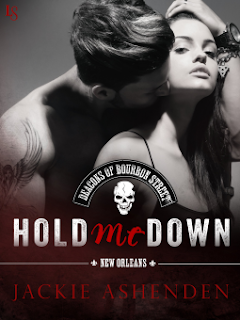 
Blurb
When the biker who broke her heart rides into town, a woman must choose between passion and duty. Jackie Ashenden ups the ante in a seductive series co-written with Megan Crane, Rachael Johns, and Maisey Yates.

Leonidas “Blue” Delacroix might be the prodigal son of New Orleans aristocrats, but the Deacons of Bourbon Street are his real family. And with their patriarch murdered, Blue wants nothing more than to unleash hell on the motorcycle club’s enemies—even if it means taking up arms against the girl who used to be his best friend. She’s done quite a bit of growing up, and suddenly their chemistry is red-hot. But where’s the line between ruthless seduction and sweet temptation?

For Alice Day, loyalty is everything. When Blue skipped town, she had no choice but to adopt a new family: their rivals, the Graveyard Ministry. Seeing him again reawakens old feelings . . . and fiery fantasies. Alice could never forget the scent of leather on his skin—just as she could never forgive the sting of his betrayal. But while the Ministry has treated her like one of their own, Blue is part of her soul. And as their liaisons hit the boiling point, Alice trusts her heart with the deadliest choice of her life.

Review
For starters I'm a little biased because there is a special place in my heart for books set in Louisiana. I am so glad that I had the privilege to read installment of the Deacons of Bourbon Street because it's edgy, sexy and hard to put down.

Leon ‘Blue' Delacroix has returned to New Orleans after being exiled by Priest, his murdered MC president . Blue has been waiting patiently in order to return to his old stomping grounds. He had only two things on his agenda 1) reestablish the Deacons' dominance in their former territory 2) revenge. But fate has away of changing all things. Blue is domineering, a bit aggressive and super sexy. He owned his role as leading male in this installment of the series and he helped to keep my eyes glued to the pages. I always love a leading male character who is cocky and sure of himself. Blue has all of the alpha male characteristics in spades and as the reader I just couldn't get enough of him.

Alice ‘Red’ Day is as strong of a character as the leading male in this tale. Alice isn't simpering and constantly in need of saving. Her character is in your face and often wondered if she carried her own set of balls around with her. Strong willed and compassionate, Red will do what is needed to keep the ones she loves safe. Beautiful, capable and independent Alice was still lacking what she most desired … a family.

The chemistry between both Blue and Red leaps right off the pages and it was a pleasure to go on the angsty ride with both. Face it, with 10 years of misunderstanding between them tempers will flare, aggression will be displayed and pent up sexual frustration will be resolved.

The story is fluid and it is easy to connect with previous characters.

~~ARC was graciously provided by the publisher via Netgalley.~~