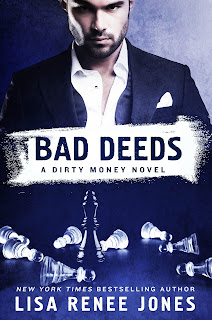 Bad Deeds by Lisa Renee Jones
My rating: 5 of 5 stars

To save his family empire from the grip of the drug cartel, Shane is pushed to the edge of darkness, forced to make choices he might never make. His father is dying. His brother is desperate to rule the empire and this means war and all gloves are off. His brother only thought he knew what dirty meant. Shane is about to give it new meaning. There is another war brewing though, and that one, is inside him, his battle between right and wrong, light and dark, and in the heat of the night, it is Emily he turns to for escape. Driving her to new limits, pushing her to accept a part of him that even he cannot.

In every one of Shane's seductive demands, Emily can taste and feel, his torment, his struggle to save his family and not lose himself. But he is losing himself, and that is a problem just as dangerous as her secret, that still lurk in the shadows, a threat to the Brandon Family waiting to erupt. No matter where she and Shane have traveled, or will travel in the future, she can't just sit back and watch him become everything he hates, everything he never wanted to become, everything she tried to save him from when she tried to run. It could be their undoing, the end. His end.

With one final book to come in the Dirty Money series, fans and newcomers alike are sure to be enraptured by the latest saga in Emily and Shane’s story and the Brandon Family. Praised as a “twisted telenovela-like” saga by Publishers Weekly, BAD DEEDS will have readers flipping pages late into the night as they catch up on all the sexy, fun drama of this habit-forming series.

This can't be the end ... it just can't. This installment of the Dirty Money series is just too damn good to end. It ends with a maybe cliffhanger and I wasn't ready for the end when it thumped me in the forehead.

The Brandon family is the perfect combination of good, bad and everything in between. Shane the ever sexy younger Brandon brother proves why he is at the top of the pack and Pops aka daddy Brandon proves why he is a low down dirty so-in-so. Big brother Derek proves that their is a heart beating in his chest and mommy Brandon just so misguided. The combination of all these characters makes Bad Deeds one of the best contemporary romances I've read this year.  Now, the family dynamics are great in this tale because they are so very dysfunctional. With the addition of Emily, the cartel and all the other players just makes this story even better.

The pace of Bad Deeds is excellent and stays focused on the lead characters. Sometimes, when there is a great cast of secondary characters authors are sometimes sidetracked. When sidetracked authors will start to narrate the lives of the secondary too soon in a series and this removes the focus from the main characters. There isn't a risk of that here but what the reader gets in return is the perfect combination of heat and angst.

The heroine (Emily) is so much stronger but there was a constant hope of her having a more kick-ass role.  You know ... slapping a couple of the characters on my behalf.  Though Emily isn't kicking butt and taking names, this doesn't take anything away from her character. In this installment, the reader witnesses the heroine taking her appropriate position beside the hero. Her character possesses a nice quiet strength that was a pleasure to read.

As mention before, the book ended with a CLIFFHANGER. Personally, I am happy with that because I can go for another installment of the Brandons. There is definitely some unfinished business and this reader is looking forward to seeing it comepleted.

Thank you to Netgalley and the publishers for providing this ARC in exchange for an honest review!


View all my reviews

About the Author
New York Times and USA Today Bestselling author LISA RENEE JONES is the author of the highly acclaimed Inside Out Series, and has now in development for a cable television show, to be produced by Suzanne Todd (Alice in Wonderland). In addition, both her Tall, Dark and Deadly series and The Secret Life of Amy Bensenseries spent several months on a combination of the New York Times and USA Today lists. Since beginning her publishing career in 2007, Lisa has published more than 40 books that have been translated around the world. Booklist says, “Jones suspense truly sizzles with an energy similar to FBI tales with a paranormal twist by Julie Garwood or Suzanne Brockmann.”


Praise for The Dirty Money Series:

“A page-turner with scorching heat.”
- Publishers Weekly on Damage Control

"High-octane romance set above the glittering lights of Denver is enhanced by the dominance of a powerful man and the cunning sweetness of a woman who isn't cowed or swayed by his wealth."
- Publishers Weekly on Hard Rules

"Sure to leave readers desperate for the next installment.”
- Kirkus Reviews on Hard Rules

"Lisa Renee Jones excels at creating powerful men and women who are determined to live life on their own terms, and fans will be immediately drawn to the dangerous world of Brandon Enterprises."
- RT Book Reviews on Hard Rules

"Edgy, brilliant and all-consuming, Dirty Money is THE series of the year! Lies, danger, secrets, and a hero you will fall HARD for. A must read!"
- New York Times bestselling author Katy Evans
Posted by Self-Professed Book Hoarders at 11:41:00 PM