Review: Obscured by Tara Sue Me as Cat Waters 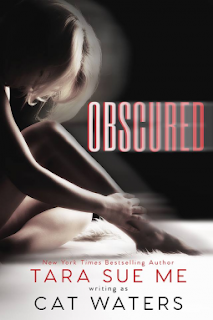 Blurb
There’s the truth you know….

At age 16, Athena Hamilton traded her body for survival when a powerful Vegas hotelier and pimp lured her into his world. Ten years of turning tricks has taught her to trust no one and feel nothing. Yet a chance meeting with a childhood crush sparks hope for something more.

The truth you believe…

There’s no way Isaiah Martin could want her. He’s a pastor. Too good. Too pure. But when she learns her days are numbered, she runs into the safety of his arms and trusts his promise of protection.

And the truth you never imagined...

The aftermath of a tragic accident and a bitter betrayal leaves her destitute and alone. The one man she shouldn’t trust offers her a chance to escape. But when good and evil collide, what do you do when the truth is Obscured?


Review
When Athena Hamilton first arrived in Las Vegas she was a sixteen year old girl abandoned by a grief stricken father and in need of a way to support herself. She tries her hand at being a showgirl. What’s so hard about that, right? All she would have to do is dance a little and wear pretty outfits … right? What happens when Athena can’t make the cut and there’s a predator sitting in the wings waiting for his next victim. Athena takes the reader's heart with her as she tries to survive Vegas and break free from her abusive pimp. The story delves into the underworld of Vegas’ sex trafficking trade. Obscured gives the basic anatomy of how ‘certain’ young women are preyed on, how they’re drawn in and finally used by pimps/predators. The emotion the story stirs lingers, but the heroine is able to retain this naivety … this sort of youthful innocence that has stayed with her even after 10 years in the game. Personally, I wanted to reach through the pages and shake her a bit for being so silly, trusting or selectively blind. The book is considered a romance but it is a very unconventional one. For those looking for a full ‘minute by minute’ bedroom romp, then you will be disappointed here. Then again, I am happy that the author excluded some of these elements because of the subject matter of human trafficking and prostitution.

There isn't the goofy eyed hero or any recognizable hero that the reader can pick out from the beginning. With its characters, Obscured deals in shades of gray with the exception of Mike (Mike ‘the pimp’ clearly has on a pair of gasoline underwear headed straight to hiffle). For example, the pastor who could have been a clear path to freedom. Isaiah Martin (the pastor and childhood friend) would have made an unusual romantic hero but a feasible one considering the life the heroine is leading. With Isaiah, his gray areas begin to show almost immediately and his innocence is just a mask to cover the devil within. His character sets off mini alarms because at times he’s just too good to be true.

Then there is Harris (the ‘sheep’ hiding in wolf’s clothing), the henchman … the hero that as a reader I didn't really see coming. Like Isaiah, Harris’ character had many gray areas but it was hard to dislike his character (even as a supposed bad guy). Thankfully, Harris fits the role of a traditional romantic figure (you know the bad guy turning good to save the girl). So, picturing him taking the road to salvation and freedom with Athena isn't hard.

The most gripping portion of this story is the evolution of Athena’s character after her captivity.The simplest of things that most take for granted are all new experiences for her.