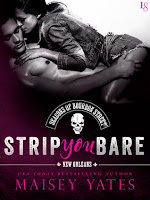 
Sparks fly when a society belle and a biker with a troubled past get down and dirty in the Big Easy. Maisey Yates turns up the heat in the sizzling finale of a series co-written with Megan Crane, Rachael Johns, and Jackie Ashenden.

Micah Carpenter hates New Orleans. Hell, after ten years he no longer has much affection for the Deacons of Bourbon Street motorcycle club, either. But when the brotherhood calls, Micah answers. Joining the hunt for their mentor’s killer, he crosses paths with a Southern belle who exudes class—and sex appeal. Micah knows better than to mess with ice princesses: No matter how hot things get, they never melt. And yet he can’t stop himself from offering her a taste of the wrong side of the tracks.


Sarah Delacroix understands that reputation is everything. The daughter of a prominent family rocked by scandal, she’s desperate to restore their good name. Micah’s exactly the kind of man she should be avoiding. Behind his sleek and sophisticated exterior beats the heart of a predator—and she knows it. But, like the tattoos beneath his tailored suit, his rough edges are irresistible. And all too soon Sarah finds him getting under her skin . . . and living out every one of her hottest fantasies


Use of language is everything when drawing the reader into a story. A writer can describe something to death but if they cannot draw their reader(s) in then it’s just a lost cause. I'm a little biased when it comes to my home state (Louisiana) and when I think of it, it’s not just someplace I go back to for a visit or to check on relatives. Louisiana has a life and vibrancy of it's own. For me, what made this installment of the Deacons of Bourbon Street really good was that Ms. Yates described New Orleans as if she was reminiscing about an old lover or if the city had a life of its own and the characters of her tale were just lucky enough to come along for the ride.

Now, how to describe Prince? Maybe, as a self-loathing bastard or a crafty pseudo chameleon who thought a change in location could change the man that he is and was. Though the change is local is forced the change in personality is carefully orchestrated. The Micah Carpenter of New Orleans came from nothing and had nothing but the Micah Carpenter of San Francisco was a millionaire … a hotelier … a somebody. Yet, he was an unhappy somebody … a lost somebody … a lonely somebody. Well, he was lonely until the stylized Prince met the Southern princess. Sarah Delacroix is the shot of reality the Prince needs to help him put things in prospective. Sarah is poised, well-bred and everything one would expect from a traditional Southern Belle. But a life of tradition and rules never can or will lead to happiness. Though I expected to see Prince trying to wine and dine Sarah in order to prove his worth. You know flashing a lot of cash to show that he fit in with the 'upper crust'. This isn’t the case and what we get is a wise-ass meeting his match. I enjoyed the interaction between both lead characters as well as the inclusion of the rest of the cast of characters associate with the Deacons. The author concludes the story very well.