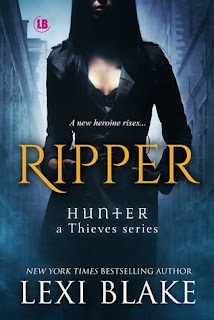 Kelsey Atwood is a private detective with a problem. She came from a family of hunters, growing up on the wrong side of the supernatural world. Tracking down bail jumpers and deadbeat dads may not make her a lot of friends, but it’s a lot safer than the life she turned her back on. She was hoping to escape from the nightmares of her past, but her latest case has brought them right back to her door.

A young woman has gone missing, and she didn’t go willingly. When Kelsey discovers that the girl is actually a shifter, she knows she should drop the case and walk away. But this shifter was a sweet kid, and she’s in serious trouble. More females are missing and the evidence points to a legendary killer. Bodies are piling up, and her case is becoming center stage for a conflict that could shatter the fragile peace between wolves and vampires.

As the hunt intensifies, she finds herself trapped between two men—Gray, a magnetic half-demon lawman, and the ancient vampire Marcus Vorenus. Both men call to her, but when a shocking secret about Kelsey’s family is revealed, it could ruin them all. To stop the killer, she will have to embrace the truth about who—and what—she truly is


Originally this book was just rubbing me the wrong way, but I'll get into that later. After continued reading my opinion began to change and I began to enjoy this first entry of the series despite the pessimistic, sarcastic and slightly suicidal female lead. Ripper had an average start (meaning it is very similar to other entries in the genre) with regard to the leading female character. Kelsey has a shadowed past, powers that she does not want or acknowledge but ends up embarking on a journey bring her powers to the forefront. All in all its pretty standard stuff.

In comes the male lead, (though I don't believe he really was or deserved to be for that matter) Gray Sloane. To make a long story short, he was hinky from the beginning. I mean, they have known each other for all of two days (TWO DAYS!) and he was throwing around "I LOVE YOUs" like your grandmother handing out her famous pie on Thanksgiving. He trapped her in much the same way a good piece of pie would (I mean no one says “no” to good piece of pie). I did not like the relationship and I am glad that it was resolved (at least to some degree because it's obvious that he still will have some influence in her story later on). I personally like Marcus and hope their relationship will be able to flourish.

Otherwise, I enjoyed this story and the action sequences were great. Additionally, I liked the world that the author created and I am anxious to see what happens next, see what else unfolds and what other mystery Kelsey will stumble onto.

In addition to the Masters of Ménage series, she is the author of the Masters and Mercenaries series. There are eight full-length novels and four novellas available now, with more coming in 2015.

In 2013, Lexi also began releasing her urban fantasy series, Thieves. The first five are available now, with Ripper, a spin-off to the series, coming in 2015.

For more information about her books, her appearances and her wacky life visit her Facebook page (http://goo.gl/q2IHnJ) or her website (http://www.lexiblake.net)